The Mad Voyage of Prince Malock

A mad voyage. A deadly sea. A prince who is determined to conquer both.

No mortal has ever sailed to the end of the world and returned to tell the tale. Legend says that the southern seas are full of dangerous sea creatures, lethal storms, and monstrous entities that even the gods cannot imagine. Only a great fool or a brave hero would dare to venture into these deadly waters, much less in response to the summons of a deity he has never even met.

Prince Tojas Malock is determined to cross the southern seas, even at the cost of his own life. To answer the summons of a goddess he does not worship, Malock recruits the finest crew money can buy: an intelligent but haughty mage, a young woman with a mysterious past, a fisherman with a secret, and an aquarian woman who knows far more than she lets on. With his ragtag crew of sailors, Malock sails to the world’s end, prepared to overcome whatever the southern seas may throw at him.

But with mortal-eating gods, murderous aquarian pirates, and a betrayal within the ship’s crew itself, Prince Malock’s mad voyage may be destined for nothing more than
a tragic end.

Buy The Mad Voyage of Prince Malock for $7.99 from:

And wherever else ebooks are sold!

It also available in trade paperback edition for $20.99. Buy it from:

CreateSpace I Amazon I Barnes & Noble

The Return of Prince Malock

After the disastrous voyage to once-mythical island of World’s End, Prince Tojas Malock is no longer sure what he believes in anymore. All he wants is time to think about what he and his crew have experienced and to see his home once more.

But upon returning to Carnag, Malock’s parents—King Halock and Queen Markinia, the rulers of Carnag—reveal that they have already arranged a marriage between him and Princess Raya Kabadi, the Princess of Shika, to take place exactly one month later. This leads into a series of events that Malock couldn’t have possibly foreseen or prepared for, including the rise of a new social movement dedicated to ending worship of all of the northern gods.

In this riveting sequel to The Mad Voyage of Prince Malock, author Timothy L. Cerepaka delves deeper into the world of Martir, a world where the gods are divided and the mortals must do whatever it takes to survive.

Buy The Return of Prince Malock for $6.99 from:

And wherever else ebooks are sold!

It is also available in trade paperback for $15.99. Buy it from:

CreateSpace I Amazon I Barnes & Noble

The New Era of Prince Malock

With the end of the world drawing closer every day, Prince Tojas Malock of Carnag leads his ragtag band of friends and allies through the dangerous southern seas to the very edge of the world in a race against time. Though Malock is determined to save the world, the gods have other plans for him and his friends, plans to derail the quest and allow the whole world to tumble end over end into oblivion.

Meanwhile, on the island of Carnag, Skimif, the aquarian leader of a social movement dedicated to ending worship of the northern gods, struggles to preserve the morale of his followers in the face of constant persecution from the government, as well as maintain his own optimism in the face of the incoming apocalypse. It is the discovery of his true destiny, however, that leads him down a path that will forever change who he is.

In this tale of mortals and gods, of destiny and apocalypse, fantasy author Timothy L. Cerepaka weaves an unforgettable story that will certainly resonate with readers and stay in their minds long after reading the last page.

And wherever ebooks are sold!

It is also available in trade paperback for $16.99. Buy it from: 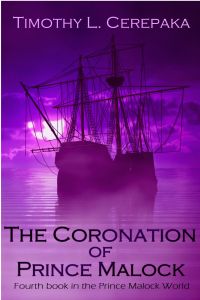 The Coronation of Prince Malock

With the unexpected death of his father the king, Prince Tojas Malock of Carnag is forced to don the mantle of King of Carnag amid persistent rumors of the corruption
of his friend, Skimif, who recently took on the role of God of Martir. Even as Malock fights to keep Carnag from joining the ever-growing coalition of Northern nations that are against Skimif’s rule, the ever-growing mountain of evidence against Skimif’s innocence causes doubt to gnaw at the back of his mind.

Ever since moving to the frigid far north, hundreds of miles away from the rest of civilization, with her adoptive father Quro, Jenur Takren believes that she can finally live the life of peace and normalcy that she’s always desired. Yet when an old enemy appears, seeking to kill her and her father for their past sins, Jenur is forced one again to use her skills of assassination to defend not only her own life, but that of her father’s as well.

In the final book in the main Prince Malock World series, Prince Malock and Jenur Takren struggle with their whole world turning upside down as their true enemy sets into motion a plan that could radically change Martir forever. Yet they may not be strong enough to do what they need to survive.

Buy The Coronation of Prince Malock for $6.99 from:

Also available in trade paperback for $19.99 from: